‘When I was a child, the elders controlled the cutting of vegetation in the swamps near my home in Meru, Kenya,’ recalls Rev Dr Samuel Kobia, former General Secretary of the World Council of Churches. ‘It was out of respect for the spirits that were said to dwell there.  The result was “sustainable land management”.

All across Africa, indigenous cultures have had a reverence for their natural environment. Today, the sacred groves of the Mijikenda people in Kenya are the last remnants of the country’s coastal forests; sacred groves in Ghana are some of the most valuable biodiversity hotspots in the country; and the ‘church forests’ of the Ethiopian highlands are among the last pockets of Afromontane vegetation.

Colonialism, and subsequent development policies, obliterated a myriad of indigenous links with the land. Forced resettlement, the expansion of monoculture, widespread deforestation, and Western cultural and educational influences have left only fragments of these indigenous links intact.

The swamps near Dr Kobia’s childhood home are now gone.

In the late 1990s, a young NGO officer working on the regreening of the semi-deserts of Niger was despondent.  ‘None of the schemes we were involved with were working,’ recalls Tony Rinaudo of World Vision Australia. ‘I didn’t know why I was there.’

The most rapid, farmer-managed
regreening in human history

During a moment of crisis, Rinaudo suddenly noticed something which had been under his nose for several years: “I realised that old tree stumps in the ground – stumps forgotten about, or regarded as a nuisance, were sending up shoots.  They were trees.  Their underground root systems were intact. They were a remnant of Niger’s ancient forest.”

Since that discovery, southern Niger has experienced perhaps the most rapid, farmer-managed regreening in human history.  Over seven million hectares of mosaic parkland – characterised by a range of indigenous trees, interspersed with millet fields – have been restored through the regrowth of ‘underground’ trees.

Faidherbia albida is a particularly valuable tree species in these parklands. It fixes nitrogen from the atmosphere and sheds its leaves at the beginning of the rainy season, enhancing soil fertility and providing light, beneficial shade to crops beneath.  Its deep root systems bring up moisture from the water table.  Millet yields in these parklands have soared without the use of chemical fertilisers.

During the dry season, the seed-pods of F.albida provide valuable fodder for livestock, as do its leaves when branches are lopped. Occasional pruning confers a constant supply of firewood. Its flowers attract honey bees. And the mature trees provide an asset that can be sold for cash when a family needs funds for health care or the children’s education.

Satellite images reveal a vast area of southern Niger that is now greener than northern Nigeria – although it has less rainfall.

Rinaudo is hailed as the father of ‘farmer-managed natural regeneration’ or FMNR.  However, he insists that he merely noticed and encouraged a form of tree husbandry that had already been practised by many indigenous rural communities for generations.

That, of course, is one of the secrets of its success.  The uptake of FMNR can spread quickly, from farmer to farmer.

‘FMNR is now known by many local names - sassabin zamani (‘modern day land preparation’) in Hausa, visiki hai mkombozi wa mazingira (‘tree stumps are the salvation of the earth) in Kiswahili, and beysatol (‘work the land’) in Senegal.

FMNR works when farmers have the incentive to benefit directly from the trees which they nurture and prune.  FMNR can reverse land degradation and restore rural livelihoods wherever community agreements can be forged to manage natural regeneration; where ill-adapted colonial laws of tenure can be revoked, and where forestry officers can be prevented from extorting fines from farmers who are pruning trees sustainably.

Pastor Dr James Wuye, member of the Interfaith Steering Committee of the African Union, is excited about the prospects:  ‘If religious leaders across Africa take these issues on board and advocate for tree regeneration we will build the Great Green Wall in no time!’

Pastor Wuye, who was a co-recipient with Imam Dr Muhammad Ashafa of the 2017 UN Alliance of Civilisations/BMW Award for Intercultural Innovation, also believes that FMNR can help mitigate the scourge of conflict between pastoralists and farmers in Nigeria, which has caused tens of thousands of fatalities:

‘Ever since childhood, my community has interacted with Fulani pastoralists. Trees are important in the relationship between us. Our people know that the Fulani like the maji tree [Faidherbia albida] in particular. The only person you will ever see at the top of a big maji tree is a Fulani and you can’t believe how they got there!  They like to cut the branches with young leaves to give to their animals.  So our people conserve the maji tree because we want the Fulani to come and bring their animals to put dung on our fields. Pastoralist-farmer livelihood collaboration is a win-win-win for the conflict actors and the environment.’

Rural livelihoods, land restoration
to get a major boost

In April 2017, Dr Dennis Garrity, Drylands Ambassador for the UN Convention to Combat Desertification and Chair of the Evergreen Agriculture Partnership, convened a pioneering workshop at the World Agroforestry Centre in Nairobi.  It brought 15 senior religious leaders – Christian, Muslim and Hindu – together with senior scientists and development professionals, to explore the synergies between science, faith and traditional knowledge.

Among the faith leaders were Archbishop Emeritus Benjamin Nzimbi, former head of the Anglican Church in Kenya and Sheikh Ibrahim Lithome, Legal Advisor to the Supreme Council of Kenya Muslims.

Rev Dr Samuel Kobia, currently serving as Senior Advisor on Cohesion, Peace and Conflict Resolution in the Executive Office of the President of Kenya, gave the keynote address:

‘Religions are requested not to shirk their responsibility towards the planet, on whose life our lives depend. Alliances are called for between faith and science, faith and the economy, faith and social movements, on ecology and sustainable development. Let us forge those links here in Kenya.’

There was a sense of excitement among all the participants that here was fertile and unexplored territory.  The meeting concluded that if and when pastors, priests, imams and traditional leaders across semi-arid Africa come to see FMNR as part of God’s injunction to ‘steward the Earth’, they could share the good news and then it could spread like wildfire.

At the end of 2017, the EU launched a major project in partnership with the World Agroforestry Centre/ICRAF and other organizations making up the Partnership to Create EverGreen Agriculture - including World Vision, Oxfam and Catholic Relief Services.  The objective of the project, referred to as ‘Regreening Africa’, is audacious: to regreen one million hectares of land within five years, using FMNR.  Regreening Africa is now gearing up across eight African countries.

Whether or not the new effort succeeds will depend on the ease with which FMNR spreads from farmer to farmer.  Much could hinge on collaboration with faith-based and traditional grassroots networks.

In Christian, Islamic and indigenous cultures, there is a shared belief that God often works with the last remnant – the last survivor of calamity, the last seed – to salvage a situation.

Rev Samuel Kobia, Dr Dennis Garrity, the project team of ‘Regreening Africa’ and others are quietly confident that - despite the huge challenges of climate change and land degradation – tree cover and rural livelihoods are about to get a major boost across semi-arid Africa. 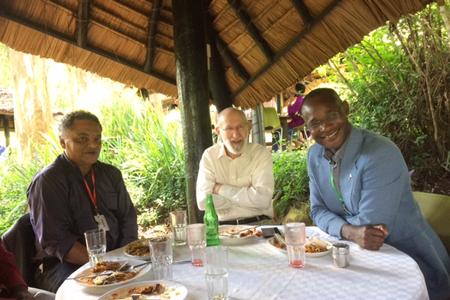 Regreening Africa gets a major boost 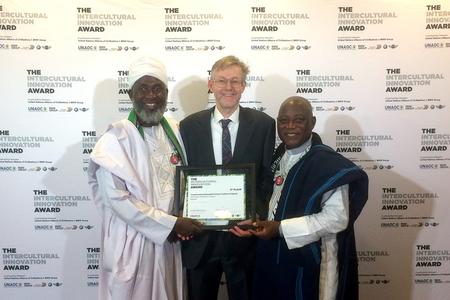 for the transformation of pastoralist-farmer conflict in Nigeria

> Back to Blog Posts

and Sheikh Mohamed Abdalla, co-directors of the Kenya Interfaith Network for Environmental Action,

at ICRAF headquarters in Nairobi.​